Good timekiller must always be able to entertain and successfuly “kill time.” But with The Tribe it’s not quite true, but the game do not become worse from that.
The Tribe – this is a game about how you (experienced shaman) lead an inexperienced Neanderthal to a better life. The task at first glance, is simple: to get from point A to B and not become a victim of some kind of prehistoric garbage, such as saber-toothed tigers, pterodactyls, swamps and other hungry natives. But this all is not so simple as it looks. 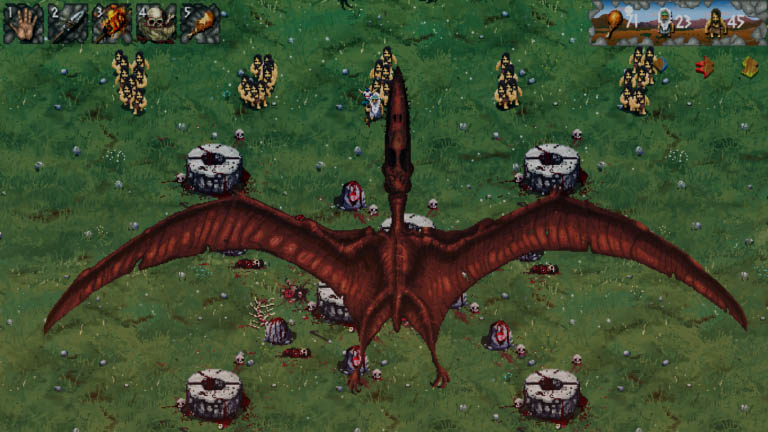 The Tribe looks like a regular runner / scroller (not horizontal), where it is necessary to quickly make the right decisions. The whole game, in general, is one big race under a beat of drums, with occasional breaks for route selection and use of tokens. You and your cavemans run through wild bushes, wild rivers, through fields of wild animals and other cavemen.

You can not slow down, but it is possible to disconnect and connect the tribe in order to collect something or in order to dodge something. During the movement player can only switch between the modes: take the spear for hunting, the torch to detect hazards underfoot, add five new villagers, or start cannibalism.

The Tribe is short game, but you pick by yourself where you will lead your little cavemans. By the way, every way has its own dangers and rewards.

Did not I say about the food? While the tribe runs, it still needs to hunt! If the stomach is empty, then a bunch of bearded pixels starts to thin out slowly, and when your tribe will go to sleep, they will recieve penality.

What makes this races so complicated? That everything should be done immediately and without delay. It is necessary to illuminate their way, run past monsters (some of them can be scared with torch), and have time to collect food. It’s not just difficult, but I would said that it is impossible.

A little perseverance and attention will allow you to run The Tribe just over an hour. Game throws quite a serious challenge. In fact, this is unrealistic hardcore runnerю

And let out the “three items of timekillers good quality ” –

Game copes with only the first and last, but does it well.