Nowadays everyone heard the “press X to win” joke, going through every second project, literally cut out a whole layer of games in which the player meets at least some challenge.

Cuphead is much different from those games. In the sense that this game is capable of shaking out your whole soul. Behind a pretty nice and harmless stylization for the Disney animation of the early 30’s, a real monster hides. This, I’m not afraid of this word, a monster that can knock down arrogance from any “gamer”, who considers himself so after playing through some “assassin”. Someone, maybe, will lead to a nervous breakdown, but someone will only throw the gamepad to the wall. I want to say that this wonderful game is worthy of meticulous parsing.

According to the plot, Cupheads lost their souls when they lose a game to the Devil himself, and they made a deal with the Unholy that they will bring back all souls that stuck in this world to him, and he in exchange will bring their souls back to them. This is all, pretty simple but still, it works.

Few words about the style of the game, firstly I want to notice that this is the only game in the modern world that takes such style. And it makes this game really unique among the others. The picture is alive, the animation is wonderful and the beautiful soundtrack and all this together merging into a really classy and interesting game that was beloved by literally everyone. If you see some footages from it, you could not be 100% sure that this is a video game, but not a cartoon.

Perfect visual is just a pleasant part of this game, but the core in the game mechanics and the difficulty. Many other great bullet hells and platformers feel good even without retro-style, and earn their place on the podium only thanks to the hardcore gameplay. 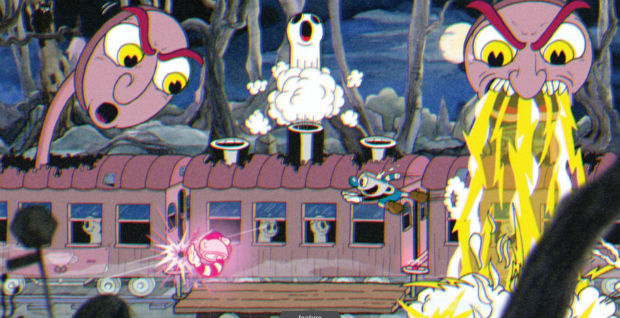 To the great joy, Cuphead is a great example of the really hard platformers. Playthrough has three various gameplay mechanics:

Nowadays every gaming redaction is obsessed with the “JUST LIKE THE DARK SOULS” theme, and I got triggered every time I see that. I just can not understand why, WHY they can compare two games of different genres with different gameplay mechanics, stylistics and other. Yes, both games are extremely hard for casual players, but they are incomparable. More than a half of all players who bought the Cuphead really will not finish it. Cuphead is much harder than other representatives of this genre, and you will need to die uncountable times to understand some mechanics of bosses, and not all of the players will be ready for such sacrifices from a game with such pretty style. Add to this a really good tempo of the game, 3 (4) healths that are not regenerate during an encounter and that bosses have different attack patterns that can be changed during the fights. And what do we get? If my calculations are right, then we will receive the most hardcore platformer over the past years.

The developers have created a truly unique project, and judging by their popularity, they did not lose when they re-house their homes to release this game. Yes, most players still will not see even half of the battles of this wonderful game, newcomers will be nervous and use the money-back system in the Steam, and the rest will play this game on YouTube or Twitch. But still, their example clearly shows that users like difficult games, we are tired of too easy gameplay solutions, health regeneration, and other similar mechanics. It’s time for a new game revolution so that developers understood that casual players are not their target audience.

Cuphead is the best that we have at the moment in its genre. It is perfect in every aspect and will give you a lot of positive emotions from complex encounters and an unforgettable sense of satisfaction after defeating the boss, to kill the one you’ve spent the last two hours. This game is not for everyone, but still, it is worth to thank the developers for creating such a masterpiece and at least buy one copy, even if you already “played” it on the Twitch.